In the fall of 2019, Ryan Roberts and I gave a talk to high schoolers at Berkeley Splash on analyzing absurd scenarios with real physics. His talk elucidated what would happen if you put an egg inside the beampipe of the Large Hadron Collider, but I wanted to answer a deep question even a small child could ask. My talk was on that age-old conundrum: what would happen if you made a planet entirely out of fish?

Part of the beauty of physics is that, if you have the right rules, you can consider absurd scenarios far beyond the realm of possibility and figure out what would actually happen. In the history of physics, this has led to major breakthroughs; Einstein was famous for using imagined scenarios to derive new physics. Our goal here is less lofty: we want to know what would happen if you put enough fish together in space to make a planet.

First, let’s imagine how this will happen. Our fish of choice will be the haddock (Melanogrammus aeglefinus), a 10-kg-max fish well-adapted to the waters of the North Atlantic and poorly adapted to the vacuum of space. Real solar systems start as rotating disks of gas, with a star forming in the center and planets gradually condensing out of the matter in the disk. Let’s just remove a young star’s accretion disk and replace it with an equal mass of live haddock.

The first thing that’ll happen is that the fish will get much bigger. In a vacuum there’s no air to push against the internal pressure of the fish, so they’ll expand, as happened to dogs in disturbing experiments in the 60s. The water in parts of the fish would also boil, not because it’s hot, but because it’s at a very low pressure. To understand why that happens, you can imagine that even with atmospheric-pressure water, occasionally little bubbles of vapor form inside it, but the pressure of the water compresses them back into nothing, the vapor’s reabsorbed, and the bubbles go away. If that water is in a zero-pressure environment, however, that opposing force is gone, and nothing prevents bubbles from forming, so it boils. The escaping vapor might then condense into tiny ice crystals depending on how far from the star this is happening.

We now have a proto-solar-system of dead haddock orbiting a star, bathed in water vapor and ice crystals. Wonderful! Now what happens? As the cloud of fish orbits the star, fish will occasionally hit each other. Usually they’ll bounce off, but with each collision a small bit of kinetic energy will be lost, and the fish will have more similar velocities after the collision than before it. Eventually, fish will collide so gently that they’ll stick together due to their tiny gravitational attraction. Small blobs of fish will collide to form bigger blobs, while the biggest blobs pick up lots of individual fish and small blobs as they move through the cloud, like a combination of the games Katamari Damacy and Feeding Frenzy. Eventually, most of the fish will be concentrated in big asteroid-like blobs. Since astronomers like to name everything, let’s do the same; let’s focus on one fish-blob and call it Blobfish. 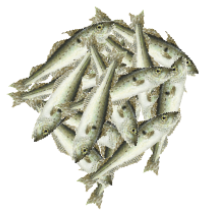 The size of Blobfish depends on how many fish it contains; more precisely, the radius scales as \(N^{1/3}\), where N is the number of fish in it. If we have, say, a million fish, we’ll get a fish asteroid with a radius of about 10 meters. Depending on its orbit, this fish asteroid might eventually pass near the star it’s orbiting, trailing dust and gas behind it, and it could also be ejected from the star system if it passes too close to a much bigger body, but at that size there isn’t much more it would do that’s interesting. We’ll need to add more fish. What about a trillion? With \(10^{12}\) haddock, we’d have a radius of a little over 1 km. Though much larger, this is still just a fish asteroid. Let’s jump up a lot. With \(10^{23}\) haddock - around one for every molecule of water in a cubic centimeter - we have a planet that’s a little like Earth. It has a radius of around 6000 km, and enough mass to be comparable to the rocky planets in our solar system. Let’s call it Rockfish. We now have an astronomical body made entirely of fish! Well, at least they started as fish. The inside of a planet after its formation can be very hot; the main reason is that the kinetic energy that the proto-planets lost in each collision while forming the planet was turned into heat. Because the fish attract each other gravitationally, there’s a lot of gravitational potential energy that’s now present as heat. The energy balance works out the same as if we’d built up this planet entirely by dropping meteors on it, which shows that each bit of mass should have enough thermal energy to move very fast. 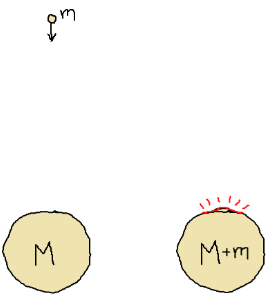 How hot is Rockfish? If you form a planet with a mass M and a radius R by bringing together small bits of mass initially spread very far apart, you get a total potential energy loss of \(\frac{3M^2G}{5R}\), which we’ll assume gets turned into heat. For a rough approximation, let’s assume that our fish planet has the density and heat capacity of water. The resulting temperature scales as \(N^{2/3}\), so a 1 km asteroid would have negligible heat of much less than a degree, but Rockfish would have a temperature 1500 K, around the melting point of iron and definitely hot enough to do serious damage to a fish. Now we have enough mass and thermal energy for new things to happen on our planet. In the intense heat, the fish are quickly reduced to their basic chemical constituents: the elements composing our fish will be mostly free to rearrange themselves to minimize their energy. People haven’t studied the basic chemical constituents of haddock closely, but the chemistry of humans is well-studied and pretty similar, geologically speaking. By mass, the human body is roughly 65% oxygen, 20% carbon, and 10% hydrogen, with at least 0.1% of nitrogen, calcium, phosphorous, potassium, sulfur, sodium, chlorine, and magnesium, with traces of many other elements. Let’s assume the fish are the same - they’ll have higher concentrations of chlorine, magnesium, and sodium from saltwater, but we won’t be precise enough for that to matter. The question of what happens to our planet is now mostly a question of geology and chemistry. Planets naturally form layers of different densities, with the heaviest elements (iron and nickel in the Earth’s case) sinking to the planet’s core. Let’s give this newborn planet a few million years to separate into layers, then analyze it in layers from the core upwards.

At the center of Rockfish, there would be a small inner core of the dense trace metals, like iron and mercury, found in fish. However, the densest thing likely to form in large quantities is actually pure carbon; graphite has a density roughly 2.3 times that of water, while the densest of the major metallic components is magnesium, which is about 1.5 times as dense as water when liquid. The core of this planet would be mostly carbon, and that carbon’s under very high pressure - the pressure at the core of a planet is proportional to M2/R4, which is again proportional to \(N^{2/3}\), so as we’ve added more fish that pressure has gotten large, reaching 50000 times the pressure of Earth’s atmosphere. Actually, at these temperatures and pressures, carbon is most stable as diamond! It turns out that this planet could easily have a core of solid diamond, which is probably its coolest feature.

Just outside the carbon core, we’d find a layer containing calcium, potassium, magnesium, and other metals denser than water but less dense than carbon. It might also contain oxygen like the Earth’s mantle. This layer would be much thinner than the Earth’s outer core, but it might be similar in one key way. The Earth’s magnetic field is caused by a complicated, poorly-understood process called the geodynamo, in which a flowing, conducting fluid like Earth’s liquid Fe-Ni outer core generates a magnetic field in a feedback loop. Our molten metal layer could do the same; it’s entirely plausible that this planet would have a magnetic field. Above that, there would be massive oceans. Water is most of the mass of a fish, so there would be enormous salty oceans with a depth of thousands of kilometers. If this planet ends up with an Earth-like moon, the tides would be massive. There would likely be undersea vents on the ocean floor. Above the ocean there’d be an atmosphere with tons of water and oxygen, possibly also with carbon dioxide and gases like methane that could be released by fish in the original accretion disk. Due to the water content in the atmosphere, there would be dense clouds and a strong greenhouse effect.

What about life? Fish are good fertilizer: by definition, this planet contains abundances of all the necessary chemical ingredients for life, and it likely has a magnetic field to shield it from ionizing radiation. If it’s orbiting a star within the right distance range, there’s no reason this mass graveyard of fish couldn’t be a birthplace of life. Actually, it turns out some bacteria can survive in the vacuum of space, so maybe some bacteria would be dormant in frozen fish or form small ecosystems on fish asteroids near the star, and then seed life on Rockfish. That’s total speculation on my part, but there would be a lot of chances for it to happen - there’d be something like \(10^{40}\) live bacteria at the start of the experiment - and the creativity of the evolution of bacteria is surprising.

What if we added more fish?

As we keep adding fish to this body, the temperature and pressure at the center will increase. When there are around \(10^{28}\) fish, the body will have roughly 10% the mass of the Sun, and fusion of hydrogen can start in its core. Let’s call the resulting object Starfish. Most of the hydrogen will likely have floated to the surface, however, so fusion would probably be slower than normal. However, if we increase this by a factor of 100, with \(10^{30}\) fish and 10 solar masses, Starfish will have enough heat and pressure to fuse carbon and oxygen, its main constituents. At that size, the star will be a blue giant that might live 30 million years before either dying in a supernova or by releasing its outer layers to form a stellar nebula.

It’d be silly to stop now. What if we added more fish?

Einstein’s equations tell us that enough mass-energy within a given radius will collapse into a black hole, so in theory, if we just keep adding fish, that’s what we’ll end up with. Let’s call it Blackfish, an appropriate name for something that’s large, black, hungry, and ultimately composed of lots of small fish. Black holes are also created in supernovae of massive stars, and since we have a star anyways, let’s consider that case. The causes, results, and mechanisms of supernovae vary a lot between stars with different masses and compositions, but as a rough figure, a star with 100 solar masses is likely to form a black hole. This corresponds to \(2*10^{31}\) fish, roughly 1000 for every atom in a human body. This star will have a relatively short lifetime of millions of years, eventually dying in a supernova that leaves behind a black hole. As far as current physics knows, that’s the end; if you add any more fish, you just get a bigger black hole.